Avaya IC servers and client applications depend upon the databases to access, store, and retrieve vital data, including information about customers, contacts, employees, and configuration. Avaya OA uses data stored in the IC Repository database.
This module describes the databases that the components of Avaya IC use and provides some basic guidelines for their implementation and configuration.

IC Databases
The table shows the databases that Avaya IC uses. An Avaya IC system might not include all of these databases, as some databases are only used by specific components of Avaya IC.
Your Avaya IC databases interact with:
Avaya IC software
Avaya IC data store units
Avaya OA software

Avaya IC is made up of servers that interact with each other to provide its functionality. You can host Avaya IC servers on the same machine, across multiple machines, and across multiple sites. The correct deployment of your Avaya IC environment is vital to achieve an optimal level of performance and security.
Consider these guidelines when you decide how many of each type of server the system requires, which computers will host the servers, where to locate those computers on the network. The guidelines are:
Server Partitioning Guidelines
Server Location Guidelines
Server Failure Guidelines
Server Interaction Guidelines
Virtualization 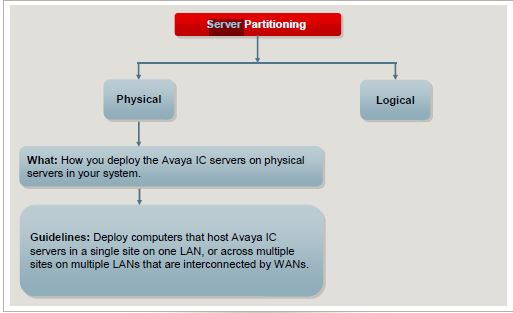 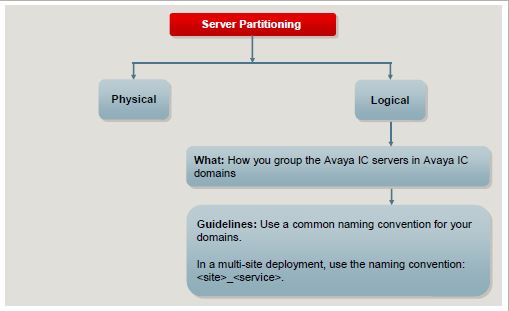 Important: Each Avaya IC domain should only contain one server of that type although there are certain exceptions to this rule. For example, the Default domain can include more than one ORB server.
Use a common naming convention for your domains to ensure that you can easily identify where a component is deployed. In a multi-site deployment, you should use the following naming convention: <site>_<service>, where service represents the media channel or function of the servers in the domain. For example, in an Avaya IC system with a site in Boston, you could name a domain for the voice channel: Boston_VoiceA.
Information: For more information about logical partitioning and how to use Avaya IC domains, you can refer to IC Administration Volume 1: Servers & Domains. For more information about recommended logical partitioning of servers, you can refer to IC Installation Planning and Prerequisites

Server Failure Considerations
Whenever possible, design an Avaya IC system to ensure that failure of a single server does not impact all agents.
Also consider the Process redundancy limitations when you designan Avaya IC system.

Network location for Data server: Locate computers that host a Data server topologically close to the computer that hosts the Avaya IC databases on a high-speed backbone. Avaya IC generates the bulk of database access traffic between the Data servers and the Database server. This configuration minimizes network bandwidth.

Reference: For more information about databases and the Data servers, refer to Database guidelines in IC Installation Planning and Prerequisites.

Report server: Install a Report server on every computer that hosts an EDU server. This configuration minimizes failure modes and network traffic. The Report server is a heavy user of the Data server. Ensure that the Report servers in the Avaya IC system do not share a Data server with a Workflow server that performs routing.

Web License Manager: Install at least one Web License Manager at each site. If you install a WebLM at each site, WAN segmentation should not prevent an Avaya IC server or client from getting the appropriate licenses. In the deployment scenarios with redundancy, the Core servers at each site host a WebLM. This configuration has no significance except to reduce the total number of computers. Note: IC 7.2 does not support segmented licensing. 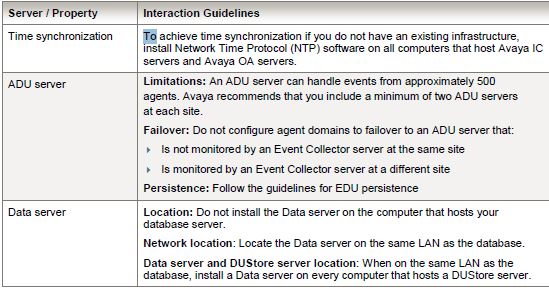 To achieve time synchronization if you do not have an existing infrastructure, install Network Time Protocol, NTP software on all computers that host Avaya IC servers and Avaya OA servers. You can use a commercial time synchronization application that includes the ability to provide gradual clock corrections over time such as Windows Time Service. Avaya IC may fail with time-out errors if you change the system clock in large increments. For example, more than two to three seconds per minute.
ADU servers support Avaya IC accounts for agents and administrators. Consider the guidelines for ADU servers when you plan the deployment of ADU servers:

The interaction guidelines for Data server are:
Data server location: Do not install the Data server on the computer that hosts your database server.

ICM server and CIRS server: If you expect a high volume of customer interaction and chat contacts on the Web Management Web site, you can add more than one ICM server to increase the number of supported chat contacts and permit greater scalability

If the Avaya IC system includes more than one ICM server:
Configure a CIRS server to provide load balancing for the ICM servers
Host each ICM server on a separate computer.
Consider the guidelines for planning the deployment of Telephony Queue Statistics (TSQS) servers:

Potential queue limitations: If there are more than 500 queues defined on the system, the TSQS server may timeout in a failover situation.

Location of Workflow servers: To mitigate the impact of a failure due to customized workflows, keep Workflow servers logically separate. For example, create a Workflow server for each media and host those servers with other servers that are specific to the same media

Customization of workflows: Workflow servers typically have many external interfaces, such as interfaces to the database and Prompter. Because the Workflow server is scriptable and extensible, Avaya cannot test all possible customizations and usages as part of the out-of-the-box product. Customized workflows can be less reliable than the sample workflows and can impact the performance of other servers. Avaya recommends that you thoroughly test all customized workflows, including possible failure scenarios

Coupling between Blender server, Workflow server, and ADU server: A tight coupling between the Blender server, Workflow server, and ADU server is critical for agent login and for agent channel assignment.
If you install redundant servers, or the contact center requires higher available of agents, include the following in your deployment:
Install at least two sets of Blender server, Workflow server, and ADU server on every LAN in the Avaya IC system that includes agent desktop applications.
Configure each set of servers to fail over to the other set of servers.
Split the agent population on the LAN between the two sets of servers. Each agent group should use one set of servers and use the second set as a backup. This set of servers is critical for agent login and agent channel assignment. If you split your agents across two sets of servers, a single server (or computer) failure cannot disable your contact center. One group of agents can continue uninterrupted operation while the other group restores connections through failover.
Note: Some deployments do not include an ADU server in a user domain. Those deployments include the Blender server and Workflow server in the user domain, and the ADU server in a media domain. Those deployments also ensure that the failover is configured correctly for the user domains and the failover domains. For more information about how to configure the failover, see Avaya IC single site deployment scenarios and Avaya IC multi-site deployment scenarios in IC Installation Planning and Prerequisites

Reference
The Avaya IC deployment scenarios have been discussed from slide 6 in this chapter.

Copyright © 2023 INTEGRATION IT.
Theme by MyThemeShop.